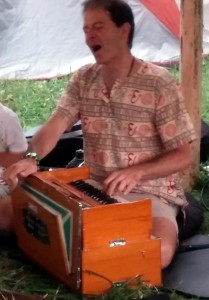 Damodar Das’ kirtan “is filled with devotion and enthusiasm. It is infused with a spiritual energy that makes it both captivating and uplifting.”  –  David Newman

“Damodar Das Kirtan shares deeply devotional and uplifting chants that blend a cutting edge musical sensibility with ancient Sanskrit mantras in a way that is fun, musical and highly relevant to the fast paced lives we so often find ourselves in …” — Mike Cohen, founder of Kirtan Leader Institute 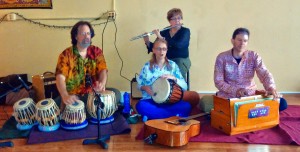 Damodar Das sings traditional and non-traditional style Sanskrit chants as part of a complete bhakti (devotional) yoga experience.  Drawing on his 11 years as a full-time pro guitarist as well as his studies with a certified instructor American Sanskrit Institute, Damodar Das delicately balances a spiritual engagement that is deep and heart-opening as well as rhythmically and harmonically fun to sing!

Damodar Das has 4 kirtan albums to date and has played at Kripalu, Omega, Andanda Ashram, as well many festivals such as LoveLight, Grassroots, and Finger Lakes Yoga Festival. Check out www.DamodarDas.com or visit “Damodar Das Kirtan” on facebook.

Click here to hear an interview with Damodar Das on WHCU Radio (November 2016).

Click here for an article on kirtan that Damodar Das was featured in from Natural Awakenings Magazine February 2011.(PDF) 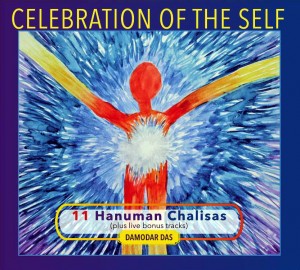 “Celebration of the Self” – 11 Hanuman Chalisas plus live bonus tracks.  A double CD  which makes a powerful homage to Lord Hanuman, Ocean of Grace. Download here $7 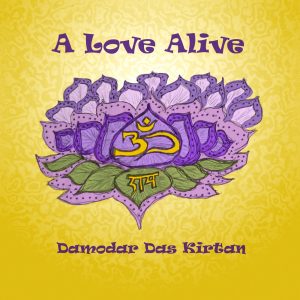 “A Love Alive.”  His 3rd CD, an authentic representation of a typical Damodar Das Kirtan event.  Download here by donation or free. 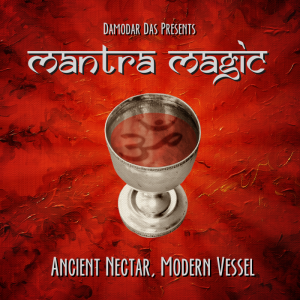 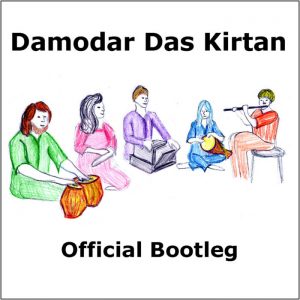 “Official Bootleg.”  Totally off the cuff and unedited!  Live from Ahimsa Yoga Studio in Ithaca, NY 19 July 2017.  Download here by donation or free.

Here is the sampler video: https://youtu.be/yWXeHCPZ1jc 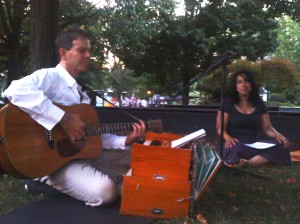 Damodar Das deeply loves kirtan as a spiritual practice and actively spreads the joy of it both as a leader and a supporting musician throughout the Northeastern United States. His deep respect for and extensive knowledge of Sanskrit chant is engagingly complemented by his jazz- and rock-influenced style of kirtan.  Damodar strikes a perfect balance between traditional and non-traditional, as well as between inward, meditation-fostering chants and those that are simply a rollicking good time to sing!

To solidify his credentials as a kirtan wallah, Damodar Das took a week-long intensive kirtan course with the world renowned chant-master David Newman at Omega Institute in Spring 2010. There he learned many traditional chants, studied Sanksrit vocabulary and pronunciation, heard stories about the Deities, and memorized several ancient Vedic prayers.

Since then, he played at such well-known spiritual centers as Kripalu, Omega, and Ananda Ashram, and leads kirtan regularly in the Finger Lakes Region of New York State.  His ensemble includes a rotating cast of other professional musicians 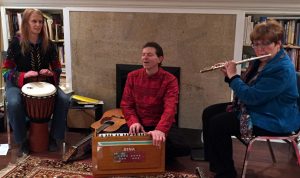 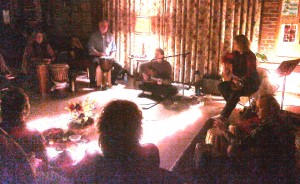 Damodar has taken traditional Eastern kirtan to a new level that continually appeals to many Westerners by utilizing his extensive jazz and rock background. As a freelance guitarist for over 10 years, he is well-versed in many styles of music and incorporates a variety of musical forms and traditions in his kirtan. Some of his chants are based on the chord progression to jazz standards and classic rock hits, even including ones from Patti Smith and Jimi Hendrix! The combination of musical familiarity and deep devotion to the Divine Names that are sung is not only widely appealing but also an uplifting experience for all who attend his kirtans.

Word is rapidly spreading about the joyful experience of Damodar Das Kirtan.  Damodar was interviewed by Natural Awakenings magazine and was featured in an article on kirtan in the February 2011 edition of the Westchester/Putnam publication.  Click here to read the article.(PDF) 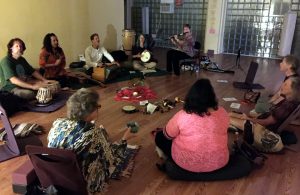 Kirtan is the practice of devotional singing to the Divine.  A form of ‘bhakti’ yoga (the yoga of devotion), this powerful, transformational spiritual practice is considered an easy path to liberation.  Kirtan opens the heart, purifies the entire being and the surrounding atmosphere and stills the mind. 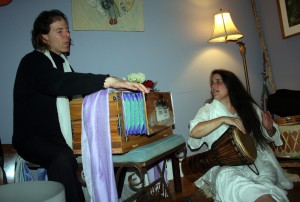 A kirtan session typically involves the singing of Sanskrit mantras.  The word kirtan comes from the Sanskrit root “kirt” which means “to name, to communicate, to celebrate, to praise, to glorify.” The word Sanskrit literally means “language brought to formal perfection.”  Over the millennia, the ancient sages, understanding the incredible power of the Eternal Word to create and sustain life, continued to develop and refine their language in hopes of discovering their own divine nature.  They “selected only those sounds which had the greatest clarity, purity, and power of resonance,” says Vyaas Houston from American Sankrit Intitute.  “The vibrational purity and resonating power of Sanskrit is above all an opera on a grand cosmic scale that you can sing with your whole heart and being.” 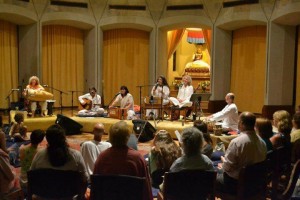 “The words of these chants are called the divine names and they come from a place that’s deeper than our hearts and our thoughts, deeper than the mind.  And so as we sing them they turn us towards ourselves, into ourselves.  They bring us in, and as we offer ourselves into the experience, the experience changes us.  These chants have no meaning other than the experience that we have by doing them.  They come from the Hindu tradition, but it’s not about being a Hindu, or believing anything in advance.  It’s just about doing it, and experiencing.  Nothing to join, you just sit down and sing.” – Krishna Das

During the 1980’s, kirtan had become a regular practice in many of the western yoga ashram communities, and by the end of the 20th century, the experience of kirtan in the West had started to travel outside the traditional yoga ashram communities and into the public sphere. With increasing interest in and attention to the world’s sacred traditions, and following on the heels of the yoga movement in the West, the experience 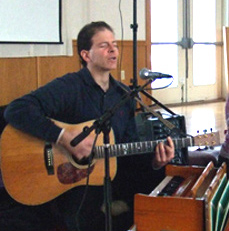 of kirtan continues to rapidly grow, extending across cultures, races and religions, and offering a profound experience of an ancient sacred tradition to the greater human community. Kirtan offers a means to connect to the heart, to the divinity that lies within.  Today, tens of thousands of people are participating in kirtan events around the world, and many new kirtan events are emerging.

Usually a chant sheet that lists the mantras used are provided at each kirtan session.  The Sanskrit word “mantra” can be broken etymologically into two root words: ‘mana’ (mind), and ‘tra’ (deliver).  Mantras thus have the power to deliver the mind from material consciousness or perception, to spiritual consciousness or enlightenment.  The mantras are generally short and easy to learn; they can even be recited a few times for practice before each chant begins. The chants are most often sung in “call and response” fashion wherein the leader sings a melody and everyone else repeats it back.  Come give it a try with Damodar Das! See calendar for details.

Here are some common questions (and answers) about sacred chanting:

How does it work?

We all sit down & sing! That’s it. Nothing further is required.

But isn’t it in Sanskrit? 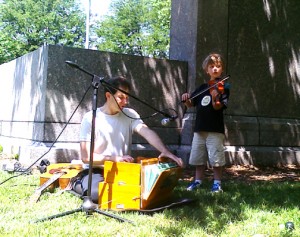 Yes but it’s generally just a few words over and over at a time, and you are given a sheet to follow along. You don’t have to get it right, you just have to sing from the heart, or if not, the lungs…

Do I have to be Hindu or have any affiliation with that religion?

I’m glad you asked. Kirtan goes beyond religion, and there are no belief systems involved. Here’s why (in no particular order):

1. The sounds themselves are said to be auspicious. Sanskrit is defined as the language “brought to formal perfection.” Even NASA has confirmed this in some of their studies (look it up). The sounds are said to harmonize with the chakras in the body, and so you feel good afterwards, hopefully … 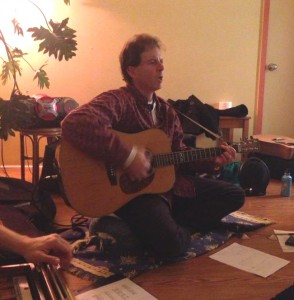 2. Kirtan is a form of ‘bhakti’ yoga, which means ‘devotional.’ When you ask “devotion to whom or what?” that’s an intellectual question. Kirtan is an emotional practice, and all humans feel the same emotions regardless of their intellectual background or capacity. The nice part is, whatever emotion you bring, discover, and/ or leave with are all perfectly acceptable.

3. Just singing itself is therapeutic. There is a billboard on rt. 86 for an insurance company that says that says “Singing while Driving lowers Stress.” Even a little baby who has no belief systems can hum a tune; and many adults simply don’t do it enough.

4. The names of God are said to be inseparable from the Divinity itself. In the material world you can’t quench your thirst by hearing the word “water.” But in the spiritual world this relativity is not applicable. And, happily, there are thousands of names of God in Sanskrit. All the chants basically just mean “Praise the Lord” or “Hurray for God” 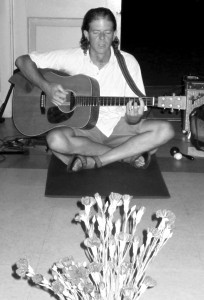 6. We sing because we are grateful for all the things we are given that were beyond our control: our lives, our health, our loved ones, food, clothing, shelter, and on and on and on and on. That in and of itself is a worthwhile practice don’t ya think?

7. We live in a fast-paced society that is filled with short attention spans. What were we just talking about? Oh yeah, kirtan is considered the “easy” path, where, in this dark age of the “Kali-Yuga” as it is called, it’s not too easy to sit and really meditate for any length of time, so we just sing instead. 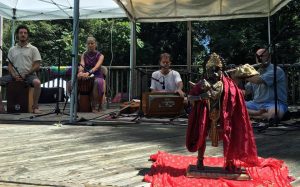 – Self-awareness meditation from the book “Grist for the Mill” by Ram Dass, narrated by Damodar Das, 25 minutes: play

– Meditation for a Great Workday.  Written and narrated by Damodar Das.  8 minutes: play.